Engineering department of the company performs calculation of DWDM networks of any complexity in short terms. Our engineers calculate more than 200 projects every year, and dozens of them reach the practical implementation stage.
Based on initial data provided by customer (scheme of the network and distances between nodes, type and quantity of fibers on each span, plans of the network development) the engineering department solves the following tasks:

We have a profound experience in designing telecommunication systems based on new formats of modulation of the optical signal. We developed methods of optimization that make it possible to achieve optimal performance for combined networks where both coherent channels 100/200 Gbit/s and noncoherent channels 10 Gbit/s are transmitted simultaneously. Due to this our customers successfully put in operation 100G channels on an old infrastructure that was intended for 10G channels.

We use self-engineered specialized software for most effective design of DWDM networks. For calculation of networks of high complexity a working group is usually created with experts of R&D department of the company. R&D department performs theoretical analysis and numerical simulation of DWDM networks of complex topology, simulation of new components (optical amplifiers, transponders and other devices), simulation and analysis of linear and nonlinear effects using the OptSim™ software and other tools. 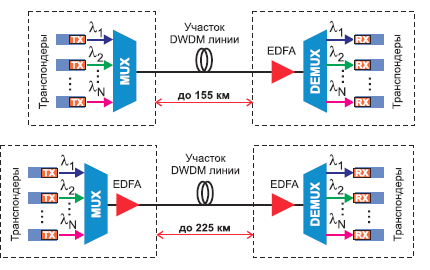 Raman amplifiers
The use of counter Raman pumping of telecommunication fibers, simultaneously with EDFA amplifiers, allows organizing 16 channels of 100 Gbit/s in lines up to 260 km long, and 80 channels of 100 Gbit/s with a span of up to 235 km with a margin of 3 dB in the middle of the span. Adding a passing Raman pump makes the figures increase, respectively, to 275 km and 250 km. 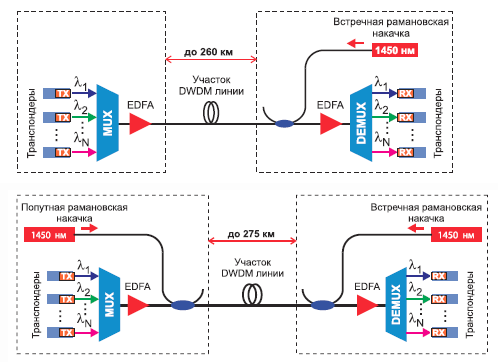 ROPA
ROPA (remote optical pumped amplifier) is remote pumping of fiber doped with erbium (EDF). The technology is used for very long sections of the DWDM line up to 475 km. Pumping is carried out on two fibers: signal and additional. Ultralow-loss fiber is used. The T8 laboratory successfully tested the transmission system of 10 * 100 Gbit/s channels in a very-long 500 km single-span fiber-optic DWDM line.