Transponder 400G on single-carrier wavelength was demonstrated during the ‘Sviaz-2018’ – Компания «Т8». DWDM-системы 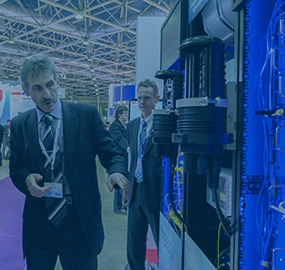 From 24 to 27 April in the Expocentre Fairgrounds was heldthe largest in Russia exhibition ‘Sviaz-2018′, dedicated to telecommunication technologies. T8 company took part in the exhibition and business events coincided with it. At the exhibition, T8 demonstrated to the visitors the novelties of the company, including the updated 400 Gbit/s aggregate transponder operating on single-carrier wavelength. Once again, the company managed not only to increase the technological gap with its Russian competitors, but also to overtake many leading foreign vendors.

On the first day of the exhibition, the head of the Federal communications Agency Oleg Dukhovnitsky visited T8 booth. General Director Vladimir Treshchikov and Deputy General Director Konstantin Marchenko made a report on the success of the company in the development and production. The presentation demonstrated a 400 Gbit/s transponder, several new Metro class network solutions and a new chassis with redundant control unit. A small test stand was organizedto demonstrate the operation of the 400 GB/s unit. T8 engineersused the traffic analyzer to control the operation of the equipment.

T8 also presented the innovative system Dunay for the organization of critical infrastructure boundaries protection. A possible application of the system is the protection of cable infrastructure of Telecom operators. To organize the security system, the operator only needs to allocate one fiber in the cable and install the Dunay block itself. The system has already proven itself in practical application by oil and gas and telecommunications companies.

On April 25, as part of the business program of the exhibition, specialist of the commercial Department Andrei Kletzmade a presentation, and on April 26, Deputy General Director Mikhail Sleptsov made a speech at the seminar of the scientific and technical publication ‘Photon-Express’. The reports were devoted to the market trends of DWDM-systems and promising developments of the company T8.